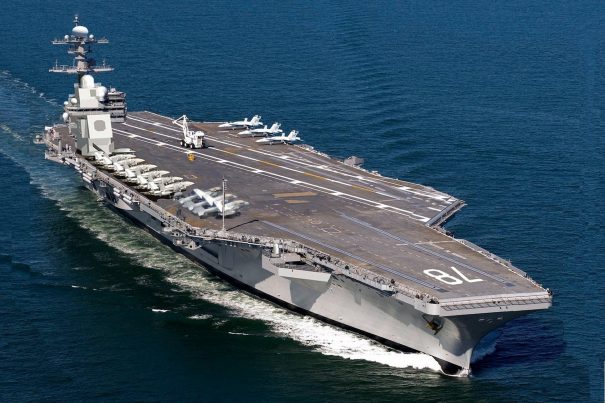 (NationalSecurity.news) The U.S. Navy’s newest $13-billion-per-copy Gerald R. Ford class of aircraft carriers, as well as the existing carrier force, are becoming increasingly susceptible to attack by precision-guided long-range ballistic missiles and will risk destruction unless major revisions are made in tactics, according to a recent paper from the Center for a New American Security.

The paper,[PDF] authored by Jerry Hendrix, Ph.D., and titled Retreat from Range: The Rise and Fall of Carrier Aviation, says that naval aviation has undergone a dramatic transformation over the past two decades in terms of focus and capabilities, “and not for the better.”

“American power and permissive environments were assumed following the end of the Cold War, but the rise of new powers, including China and its pursuit of anti-access/area-denial (A2/ AD) strategies and capabilities to include the carrier-killing 1,000 nautical mile (nm) range Dong Feng-21 anti-ship ballistic missile, now threatens to push the Navy back beyond the range of its carrier air wings,” the paper says.

“This push back would limit the service’s ability to project power and thus undermine the credibility of the United States and the effectiveness of the global international system of governance that it, in conjunction with its allies and partners, has labored to build over the past 70 years,” it noted.

While the earliest naval planners envisioned carriers as anti-ship weapons, the Navy eventually began to understand that carriers provided the nation with an unrivaled power projection tool, a concept driven home by the Imperial Japanese Navy attack on the U.S. Pacific Fleet at Pearl Harbor, but perfected by the U.S. Navy during the Cold War years.

Today, however, as ballistic missile technology improves dramatically, critics of carrier tactics are sounding the alarm that the day is fast approaching when they will become obsolete for use in great power conflict – that is, without enhancing their power projection capabilities.

And for carriers, that means extending the operational distance of air wings.

“The rapid successive retirements of the A-6 Intruder, F-14 Tomcat, and S-3 Viking that followed, and the decision to replace these aircraft with variants of the F/A-18 Hornet – originally designed as a replacement for the short-ranged fighters and light attack aircraft – shrank the average range of the carrier air wing from over 800 nm in 1996 to less than 500 nm by 2006,” the report said. “This occurred just when competitor nations, led by China, began to field A2/AD systems with ranges of 1,000 nm or more.”

What’s more, the naval variant of the F-35 is not expected to increase carrier air wing range by much.

In an earlier report,[PDF] Hendrix, a U.S. Navy captain, argued that the sea service’s legacy carrier fleet – at 12–14 vessels – are fast becoming vulnerable to modern weapons.

“The queen of the American fleet, and the centerpiece of the most powerful Navy the world has ever seen, the aircraft carrier, is in danger of becoming like the battleships it was originally designed to support: big, expensive, vulnerable – and surprisingly irrelevant to the conflicts of the time,” he wrote in At What Cost a Carrier?

Others believe that the Navy should downsize its aerial platforms, not super-size them, as is the case with the Ford class.

“Hendrix alludes to ‘light amphibious carriers’ as possible replacements for the supercarriers, but fails to mention the specific vessel type best suited to this role. The future USS America, nearing completion at a shipyard in Mississippi, is roughly half the size of today’s Nimitz class and less than a third the cost,” WIRED reported.