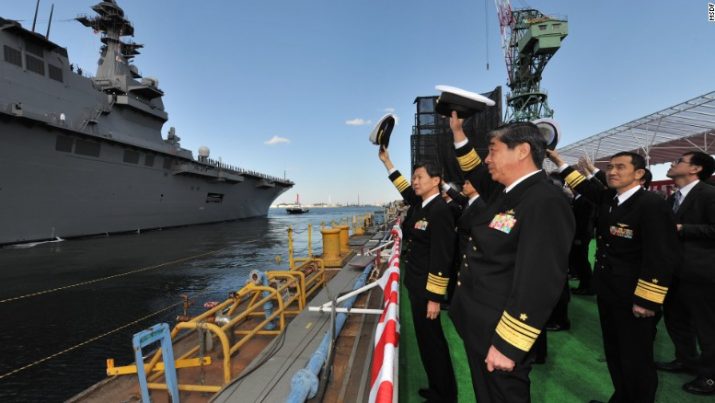 (NationalSecurity.news) The Japanese military is implementing defense plans aimed at protecting its far-flung chain of islands from Chinese incursions and aggression in the East China Sea, a strategy aimed at denying Beijing dominance in the Western Pacific Ocean, Reuters has reported.

Japanese military and government sources say that the plan is to turn the tables on the Chinese navy, which is growing in strength and capability and, Tokyo believes, in its militarism.

Japan’s “anti-access/area denial” strategy, or A2/AD in military parlance, comes in response to U.S. prodding for its Asian allies to help with containment of the Chinese. Since the end of World War II, Japan has essentially been a protectorate of the United States and as such has maintained a smallish military for home defense.

But with a rising China, the U.S., as part of its pivot to Asia, is working with allies in the region to help build a credible counterweight, and Japan is an important piece of that strategy.

As such, Reuters noted:

Tokyo is responding by stringing a line of anti-ship, anti-aircraft missile batteries along 200 islands in the East China Sea stretching 1,400 km (870 miles) from the country’s mainland toward Taiwan.

In interviews with scores of military planners and government policymakers, the newswire reported that Prime Minister Shinzo Abe has a broader goal of enhancing the Japanese military with capabilities so it can dominate sea- and airspace around Japan’s remote islands.

Though the installations are not a well-kept secret, this is the first time that Japanese officials have said that the intent of the military buildup and enhancement is to keep China at bay in the Western Pacific.

Chinese ships launching from the country’s eastern seaboard will have to sail through a barrier of Japanese missile batteries in order to reach the Western Pacific – access that is important to Beijing as a gateway and supply line to the world’s oceans, as well as the projection of its own naval power.

The developing Japanese A2/AD strategy comes as China continues to flex its own military power in the South China Sea, with the construction of man-made islands in waters claimed by about a half-dozen Asian nations, new submarines and surface ships including aircraft carriers.

As for the fortified Japanese islands, China is free to sail the waters under international law, but its vessels will do so in the crosshairs of missile batteries.

“In the next five or six years the first island chain will be crucial in the military balance between China and the U.S.- Japan,” Satoshi Morimoto, a Takushoku University professor who was defense minister in 2012 and advises the current defense chief, Gen Nakatani, told Reuters.

The first island chain is defined as a string that extends through Japan’s East China Sea territory and south through the Philippines. It may come to define a boundary between U.S. and Chinese spheres of influence, officials noted.

Other defense experts noted that China’s goal is to become the dominant power throughout the South China Sea, and that its island-building and claims of sovereignty over other chains like the Spratly’s – which are also claimed by several other Asian powers – are part of Beijing’s own A2/AD strategy.