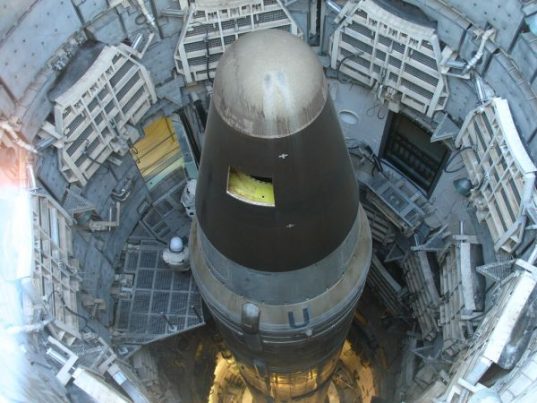 (NationalSecurity.news) The U.S. Air Force maintains about 450 Minuteman III nuclear-tipped intercontinental ballistic missiles, but a new report says that those weapons are being directed by Cold War-era mechanical guidance technology that is highly inaccurate.

As reported by The Daily Beast, in 2005 the Pentagon retired its fleet of MX Peacekeeper missiles – 10-warhead mega-weapons that were on 24/7 alert and were highly accurate. But after they were assigned to the dustbin of history, for years no one seemed to realize just what the Defense Department had given up as regards to U.S. nuclear weapons capabilities.

As The Daily Beast reported further:

…[W]hat few people realized then—or even in the decade since—is that the Peacekeeper’s exit from the arsenal also marked the disappearance of what the White House regards as an essential facet of U.S. nuclear deterrence: a constant ability to hold virtually all key Russian political and military targets at risk. Should that worst-case scenario play out, Washington also wants to retain enough residual weapons to deter any opportunistic attack by Beijing.

Before the last MX was removed from its underground silo in Wyoming, plans were underway for the Air Force, which maintains the nation’s nuclear arsenal, to transfer MX-like accuracy into the remaining ICBMs. But that transition never took place and, for some reason, few inside the Pentagon realized it.

Now, somewhat haltingly, the process has begun again, but it is being hampered by bureaucracy and budgetary limitations, The DB reported. As such, the remaining Minuteman ICBMs are still operating under 1960s-era mechanical guidance technology. And while it is accurate enough to strike some enemy targets, “hundreds of the missiles would have little chance of damaging their assigned targets – Russia’s most valuable war-making assets – as top-secret U.S. nuclear war plans demand,” the web site reported, citing government documents and officials familiar with the situation.

A number of aiming points are deemed “very hard targets,” and they consist of VIP shelters, hardened missile silos, military storage facilities and command-and-control sites, all of which are buried deep beneath reinforced bunkers.

These hardened sites are among the first facilities that the Pentagon and the White House would target in virtually any nuclear conflict, sources told The DB, with the objective of quickly crippling Moscow’s ability to retaliate further against the U.S.

Currently, the Pentagon is working on the development of a program known as Prompt Global Strike, which would enable the U.S. military deliver a precision-guided weapon anywhere in the world within 1 hour. It is believed that such a system would augment nuclear strategy with hypersonic glide weapons that are conventionally-tipped.

But that system is still in development and there is no date set for its implementation, reports said.

In the meantime, the Pentagon has assigned the majority of hard targets to the ICBM fleet; the land-based Minuteman III’s can be launched within moments of a presidential order, while bomber-based weapons (which went off hair-trigger alert following the collapse of the Soviet Union in 1991) and submarine-launched missiles can take hours to days to prepare.

While most people see any nuclear explosion as catastrophic – and it would be for humans and most buildings – if the notion is to cripple a nuclear-armed enemy before it can inflict casualties on the U.S. is the goal, then weapons designated for that purpose must be accurate enough to fulfill the task.

Air Force briefing slides reviewed by The Daily Beast characterize the Minuteman 3 as being 50 percent less accurate than the MX was. That could mean the difference between disabling a very hard target and leaving it untouched.

“We are no longer able to cover the targets that Peacekeeper covered, ever since Peacekeeper went away,” said one former ICBM operations commander at the squadron and wing levels. “The math is really simple.”

Several sources that spoke to The DB appeared to understand the sensitive nature of the information but they said they were willing to speak out publicly, if only anonymously, because they believed only after a public airing would the problem get resolved.

One Pentagon official – Navy Adm. Cecil Haney, commander of U.S. Strategic Command – is fully aware of the deficiency. He says that commercially available solid-state guidance technology would resolve the problem – but that it may still take years to get done.

NationalSecurity.news is part of the USA Features Media network of sites.