China closing in on the Philippines as U.S. sends carrier group to South China Sea 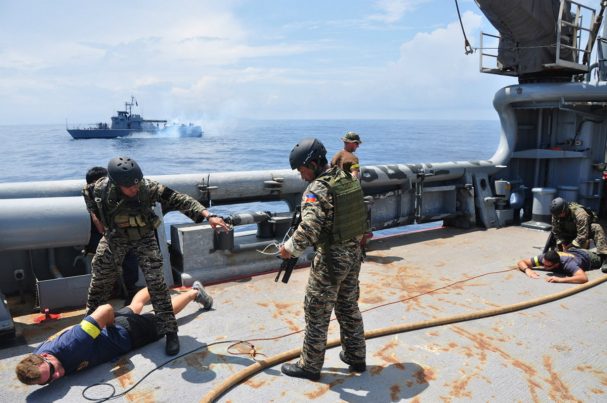 (NationalSecurity.news) The Chinese navy has begun an effort to seize more control over waters and atolls in the South China Sea that have historically been under control of the Philippines, as the Pentagon dispatched a six-ship carrier group to the region as a means of reaffirming support for an Asian ally.

As reported by The Daily Beast and the Navy Times, the six-ship U.S. contingent features the USS John C. Stennis aircraft carrier and, notably, the USS Blue Ridge, the 7th Fleet’s flagship.

The report of the deployment came a day after China’s foreign ministry said Chinese vessels had departed the area around Jackson Atoll, near the Philippines, after freeing a grounded “foreign” ship there.

However, Chinese navy and Coast Guard ships had in fact swarmed the uninhabited atoll for weeks, preventing Philippine fishermen from accessing their nearby traditional fishing grounds.

“There is little doubt Beijing was making a bid to control the atoll in the Spratly chain of islands in the southern half of the South China Sea,” The Daily Beast reported.

Like Russia, China appears to be redrawing historical boundaries and by force, destroying the global rule-based order in the process. Antony Blinken, deputy secretary of state, said in a speech last year, “In both eastern Ukraine and the South China Sea, we’re witnessing efforts to unilaterally and coercively change the status quo – transgressions that the United States and our allies stand united against.”

Some who have been monitoring events in the South China Sea believe it is too late to take it back from China, but the deployment of the Stennis and Blue Ridge make clear a renewed commitment by the U.S. to ensure freedom of navigation in waters through which trillions of dollars’ worth of trade pass annually.

Though Jackson Atoll, which is ring-shaped and barely visible at high tide, is not as prominent as Crimea, the nature of the aggression being employed is the same as it is in Europe.

Not surprisingly, China – whose navy is quickly modernizing and is much larger and more powerful than that of the Philippines – seized nearby Mischief Reef from Manila in 1995 and has since fortified it.

In June 2012 the Obama administration negotiated a settlement that called for both nations to withdraw their ships from the region but only the Philippines complied. China has held the shoal since and the White House has done next to nothing to counter the aggression, until now.

Beijing, seeing no pushback, then increased the pressure on the Philippines, especially Second Thomas Shoal. There, Manila in 1999 grounded the Sierra Madre, a World War II-era hospital ship, and stationed a tiny garrison of marines onboard to buttress its sovereignty claim. The Chinese have tried to starve out the troops by continually interfering with resupply missions.

Manila has attempted to litigate its claims in international court at The Hague, but Beijing has simply refused to take part in those cases.

The Obama administration has been steadily increasing U.S. naval presence in the region since last year, including more “freedom of navigation” missions by warships and bombers, in challenges to Beijing’s outsized territorial claims.