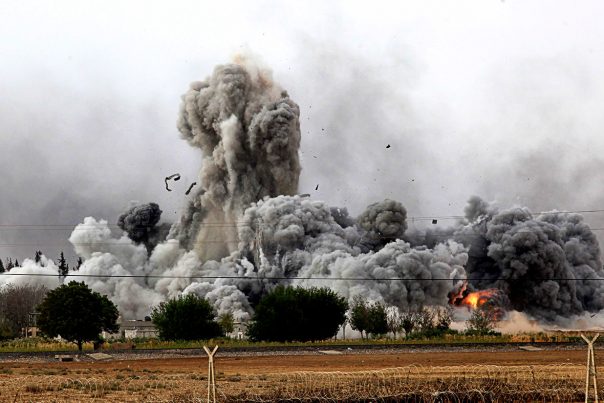 (NationalSecurity.news) A bipartisan group of House members is renewing its push for a full debate, and an immediate vote, on authorizing military action against the Islamic State group, with some promising to add amendments to the new defense spending bill that would cut off funds to fight the terror group without congressional authorization.

The Obama administration sent a letter to Congress in February 2015, requesting a new Authorization for Use of Military Force (AUMF) to supplant the 2001 grant of force approved in the wake of the 9/11 terrorists attacks.

That authorization only includes those who participated in or provide aid to the September 11th attackers, and to al-Qaida.

Congress has taken no action on the President’s request. Alternative resolutions proposed in both the House and Senate also failed to gain approval.

Speaking at a press conference in front of the Capitol on Thursday, Rep. Jim McGovern (D-Mass.), the author of an earlier House AUMF proposal, said, “when it comes to America’s war against ISIS in Iraq and Syria, Congress is missing in action.”

“In recent weeks,” McGovern said, “we have seen the U.S. send more and more troops to Iraq and Syria, and congressional leaders aren’t even batting an eye.”

In a speech in Hannover, Germany, in April, President Obama announced that he had “decided to increase U.S. support for local forces fighting ISIL in Syria,” on top of the troops he had already committed to join Iraqi forces fighting the group in that country.

The United States currently has more than 4,000 troops in Iraq and nearly 300 in Syria.

McGovern noted he has sent a letter to House Speaker Paul Ryan in December, asking for a full House debate on an authorization for the use of military force in the region, and that Ryan had told him it would be a “top priority for 2016.”

“But six months later, we are still waiting,” to have that debate, McGovern said.

“If Congress is too damn chicken to do its duty by voting on whether to authorize this war,” McGovern said, “then we should bring our troops home.”

McGovern plans to introduce an amendment to the National Defense Authorization Act (NDAA), stating “no more money can be obligated or expended for the deployment of U.S. troops in Iraq or Syria after April 30th [2017], if an AUMF hasn’t been enacted.”

“No AUMF, no money, it’s that simple,” said McGovern.

Representative Scott Rigell (R-Va.) said he joined the group to advance “a deeply held principle,” that of the separation of powers and the concomitant need for congressional involvement in the war-making process.

Rigell believes the 2001 AUMF used to support recent troop deployments is “crumbling,” and “not binding or standing in any respect.”

Rigell referenced an amendment he plans to offer to the defense spending bill that includes a 2015 AUMF proposal put forward by Virginia Democratic Sen. Tim Kaine and Arizona Republican Sen. Jeff Flake, and backed by a companion resolution of his own.

According to a press release from Rigell’s office, that measure would allow the President to take “specific, strategic military action and to provide support to our allies and regional partners in the battle to defeat ISIL.”

This proposed AUMF, Rigell says, contains “a clause that defines this authorization as the sole statutory authority for the war on ISIL, as opposed to the 2001 AUMF.”

It would also repeal the AUMF approved in 2002, authorizing the Iraq War. To remain in effect, the new authorization of force would need congressional approval again after three years.

“I don’t believe that any AUMF should exist in perpetuity,” Schakowsky added.

NationalSecurity.news is part of the USA Features Media network. Check out our daily headlines here.