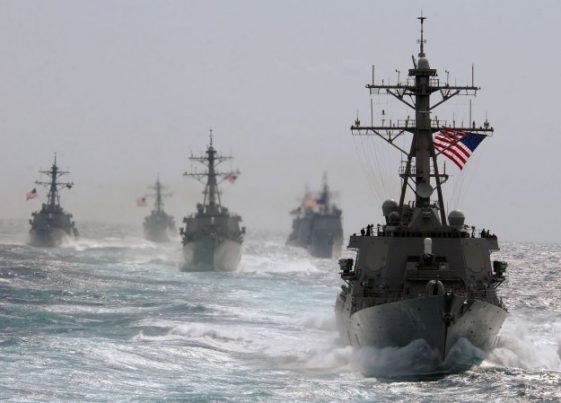 (NationalSecurity.news) A member of the House Armed Services Committee says that when the American people find out how U.S. Navy sailors captured and briefly detained by Iranian naval forces last year were treated, they will be shocked and upset.

In an interview with the Washington Free Beacon, Rep. Randy Forbes, R-Va., said that the details of the encounter remain classified but that he and other panel members had recently been briefed about it. The details are currently being withheld from release by the Obama administration, which has been roundly criticized for its nuclear deal with Iran. Recent reports noted that high-ranking administration officials mislead the media over specifics regarding the deal.

Forbes hinted that it may be a year or more before details of the Iranian encounter are fully released to the American public, in which several U.S. sailors were captured at gunpoint.

“I’ve had a full classified briefing” from military officials, Forbes told the WFB. “It could be as long as a year before we actually get that released.”

Details of the abduction are likely to start an uproar in the nation and call into question the Obama administration’s handling of the incident, which many experts say violated international and maritime law, the news site noted.

“I think that when the details actually come out, most Americans are going to be kind of taken aback by the entire incident, both how Iran handled it and how we handled it,” Forbes said. “I think that’s going to be huge cause for concern for most Americans. That’s why I’ve encouraged members of Congress to get that briefing so they do know exactly what did take place.”

In recent days the Pentagon sacked the Navy officer who was supervising the two fast boats captured by the Iranians. Foreign Policy reported that Cmdr. Eric Rasch, who was the executive officer for Coastal Riverine Squadron 3, which included the boats that sailed into Iran’s territorial waters on Jan. 12, will be reassigned to another post, the Navy said in a statement. Rasch was removed “due to a loss of confidence in his ability to command,” it said; such outcomes often spell the end of a military career.

Forbes hinted that Iran’s treatment of American sailors, which included a video of one sailor crying and forcing all of them to apologize at gunpoint, was probably much worse than what has been reported publicly.

“I think clearly there were violations of international and maritime law that took place here,” Forbes said. “We [the United States] did almost nothing in response, in fact, to have Secretary [of State John] Kerry actually thank them for releasing our sailors after they way they captured them, I think was a slap in the sailors’ face.”

For his part Forbes is pushing a new measure that would bolster sanctions on Tehran for its treatment of the U.S. sailors in order to hold Iran accountable for its aggressive behavior.

Reports at the time said one of the two U.S. Navy riverine craft broke down while transiting the Persian Gulf and as the crews tried to repair it they were surrounded by small Iranian navy craft.

In response, Congress has to take bold action to hold Iran accountable for its aggressive military behavior, Forbes said.

“These kind of actions undermine stability in the Gulf,” he said. “And they raise the danger of inadvertent escalation.”

NationalSecurity.news is part of the USA Features Media network. Check out all our daily headlines here.