U.S. suspending all contact with Russia as White House declares there is ‘nothing more to talk about’ 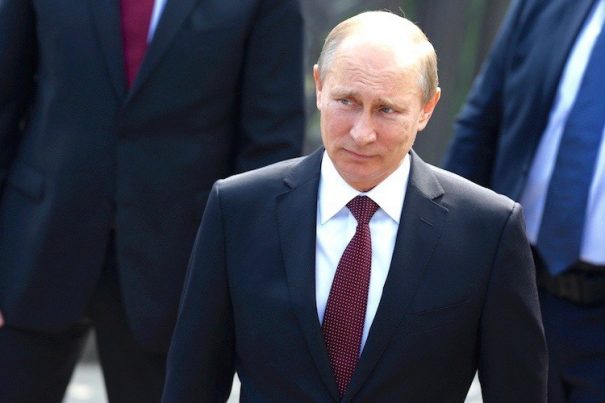 (NationalSecurity.news)  Following weeks of deteriorating diplomatic efforts between the U.S. and Russia over Syria — to the point where the U.S. has now placed additional military options on the table — Russian President Vladimir Putin suspended a nuclear pact with Washington on Monday, Reuters reports, indicating his willingness to play the nuclear card with the United States.

“Starting in the last years of the Cold War, Russia and the United States signed a series of accords to reduce the size of their nuclear arsenals, agreements that have so far survived intact despite a souring of U.S.-Russian relations under Putin.

“But on Monday, Putin issued a decree suspending an agreement, concluded in 2000, which bound the two sides to dispose of surplus plutonium originally intended for use in nuclear weapons.”

Putin’s decree, released by the Kremlin on Monday, cites “unfriendly acts” by Washington as motivating factors for the move. Under the accord, the U.S. and Russia were each to dispose of 34 metric tons of weapons-grade plutonium — enough for about 17,000 nuclear warheads.

The Russian Foreign Ministry, commenting on President Putin’s move on Monday, stated: “The Obama administration has done everything in its power to destroy the atmosphere of trust which could have encouraged cooperation.”

The agency added: “We want Washington to understand that you cannot, with one hand, introduce sanctions against us where it can be done fairly painlessly for the Americans, and with the other hand continue selective cooperation in areas where it suits them.”

Diplomacy between the U.S. and Russia in Syria appears to have cratered entirely, in fact. On Monday, officials from both countries indicated that talks of any potential ceasefire in Middle Eastern nation have completely fallen apart.

“All contacts between the military have been stopped of late,” TASS reported Russian Deputy Foreign Minister Gennady Gatilov as saying, adding “there has been no exchange of information.”

Then, in a statement issued by the U.S. Department of State, spokesman John Kirby said:

“The United States is suspending its participation in bilateral channels that were established to sustain the Cessation of Hostilities. This is not a decision that was taken lightly. The United States spared no effort in negotiating and attempting to implement an arrangement with Russia aimed at reducing violence, providing unhindered humanitarian access, and degrading terrorist organizations operating in Syria, including Daesh and al Qaeda in Syria.”

So — for now, at least — it appears any pretext at diplomacy regarding Syria has evaporated, as the world’s two greatest superpowers continue to jockey for dominance in the war-torn region.

In addition to these ominous developments, the White House has very publicly shut off any further diplomatic discussions with Moscow. On Monday White House spokesman Josh Earnest declared ominously that “everybody’s patience with Russia is running out,” adding, “there is nothing more for the United States and Russia to talk about.”

As for Russia, Bloomberg News reported, its foreign ministry has sent a much more conciliatory – if not equally ominous – response. “We urge the U.S. to assess the situation once more in light of how their actions appear before the world. The stakes are very high,” a statement from the ministry said.

All of this comes as Russia conducts the largest civilian nuclear drill in years. The Sun reports:

Russia is holding a massive evacuation drill for more than 40million people to prepare for nuclear war.

More than 200,000 emergency services personnel and soldiers will use 50,000 pieces of equipment during the massive civil defence exercise.

The former Soviet nation is ramping up fears over nuclear war and blaming the West for the unsettling possibility of a conflict.

As international tension builds following attacks in Syria, Russian state officials are preparing terrified citizens for a nuclear war – which they say would be started by America.

Today’s exercise is being run by EMERCOM, Russia’s Emergencies Ministry.

It’s not clear whether this drill will change anyone’s mind in Washington about opening up a dialogue again. And it’s uncertain as to why the Obama administration continues to pursue a policy of unseating Syrian President Bashar al Assad, especially after helping to depose other former leaders of Middle East countries has led to such turmoil and chaos.