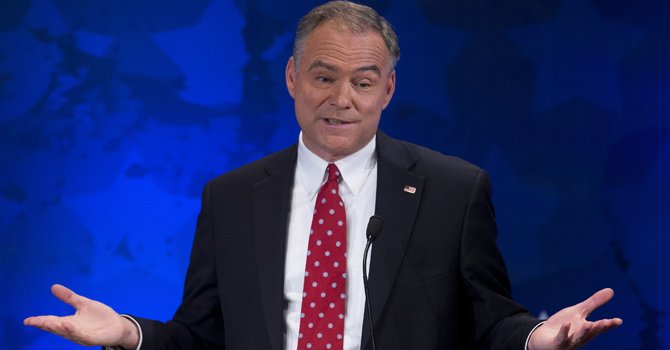 The Democratic Party and its angry left-wing sycophants have become completely unhinged since they were bested by a former reality TV star and billionaire businessman, and you see them unraveling daily without having to put much effort into it.

Consider what Tim Kaine, Hillary Clinton’s vice presidential pick and a sitting U.S. senator just suggested: That the Left would rather relive the 1960s and foment war on our streets and on our campuses than do the civilized thing after losing election after election all around the country — reevaluate, adopt a new message, and try to reconnect with a majority of the American people.

In an interview with little-watched MSNBC, “Morning Joe” co-host Mika Brzezinski asked Kaine about the future of his part and what needs to happen moving forward for it to remain a viable force in American politics, as reported by Breitbart. (RELATED: What is the media misreporting today? Find out at MediaFactWatch.com)

“So, broad question about the future of the Democratic Party, especially given your firsthand experience with what we’ve all been through,” she began. “There’s so much going on here that we clearly see, you know, places where you — we can criticize what the administration is doing, but how does the party rebuild? How do you prevent overreach in a situation like this? How do you prevent a continuation of the bubble in a situation like this, and how does the party reclaim its reach across the country while fighting these battles?”

Kaine’s response is something you might have expected to hear a member of Congress utter 50 years ago – and it is very telling as to what kind of party the Democrats have become (the Anarchy Party).

“Well, let me talk about continuation of the bubble, Mika. This is something I’m so excited about. I saw that Howard Dean tweeted at me the other day, ‘Tim, the base is getting ahead of the leaders.’ That’s exactly backward,” he said. “We are so excited that the American public is energized to speak out against the abuses of this administration. Democratic senators led healthcare rallies — Save Our Healthcare — on Martin Luther King Day in about 75 cities around the country, including Richmond. Tens of thousands of people rallied to save our health care. Then, the Women’s March that was organized at a grassroots level. Then, people coming out in protest of these orders. So, the way we get outside the bubble is we take advantage of this tremendous public outcry against the administration. What we’ve got to do is fight in Congress, fight in the courts, fight in the streets, fight online, fight at the ballot box, and now there’s the momentum to be able to do this. And we’re not afraid of the popular outcry, we’re energized by it and that’s going to help us do our job and do it better.”

That is an incredibly irresponsible thing for any public official to say, let alone a current U.S. senator and a man who, just a few months ago, was in the running to become vice president of the United States.

Now flip this, and imagine if President Donald Trump had told an interviewer Republicans were going to ride the wave of momentum for his victory and “fight in the streets” any opposition to his policies; he would most definitely sound as crazy as the angry Left is attempting to make him out to be. (RELATED: Watch the angry Left continue to destroy the civil society at Collapse.news)

Much of the “momentum” that Kaine is talking about is manufactured – bought and paid for with money from Democratic Party puppet master George Soros – which means, there isn’t really much enthusiasm for it outside reliably Left-wing pockets of political ideology in cities and college campuses. If there really were massive support for him and his twice-failed presidential running mate, she would be sitting in the Oval Office today (along with her major Clinton Foundation donors), not Trump.

Still, every society has its anarchists and it appears as though official Democratic Party strategy is to tap into that faction, then manufacture and support civil unrest and domestic terrorism. To toss out a suggestion that we should all be fighting this out in the streets of our cities is like tossing gasoline onto a fire, and Kaine should be held to account for that during these highly volatile times.

He cannot be held legally liable for his comments, which are really akin to fomenting domestic insurrection, because he’s protected from prosecution as a sitting U.S. senator. He can, however, be expelled, under Article I, Section 5 of the Constitution.

What are you waiting for, members of the Senate? It’s time to make an example of an anarchist.