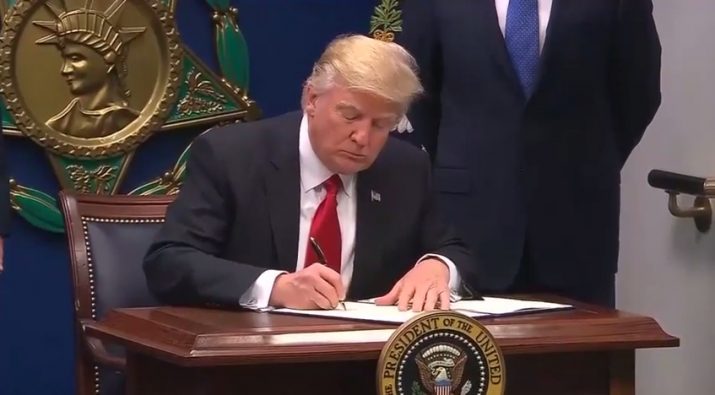 After President Trump signed an executive order last Wednesday, effectively ending “family separations” occurring at the US-Mexico border where illegal immigrants are detained after crossing into the United States, Democrats and the liberal media started beating their chest.

“We won! We made him cave, this is the most embarrassing moment for Trump and his presidency,” leftists exclaimed.

The mainstream media alleged the president’s base supporters were tragically saddened and disappointed the Commander-in-Chief didn’t have the guts to stick to his policy and is even less committed to securing the border than Obama was.

Rather than declaring victory after President Trump signed executive order, addressing their objections to children being taken from their parents at the border, Democrats complained detaining any illegal immigrants is “a crime against humanity,”proving they are insincere about solving illegal immigration, that their primary interest is effectively fully open borders and amnesty for all currently detained illegal immigrants.

Attorney General Jeff Sessions is insisting adults detained while traveling with children and claiming to be their parents would have to take a DNA test, along with other biometrics, to prove they were related. Many of those caught with children are not their parents but coyotes paid to take them across the border or — worse — human traffickers. They’re less likely to try to sneak unaccompanied children into the country if they can be genetically identified.

As Gateway Pundit reported, the Office of Refugee Resettlement under the Obama administration neglected to protect thousand of Central American children who surged across the U.S. border by failing to properly vet government approved caretakers who often times were traffickers and abusers.

DNA testing would serve as a means to return some 3,700 children to their parents.

According to government figures, approximately 1 million young people and underage girls and boys in the United States are trafficked for sex.

When President Trump first entered the White House, he vowed to help end human trafficking,  and he is keeping his promise. Since Trump was sworn in on Jan. 20, 2017 authorities have arrested an unprecedented number of sexual predators involved in child sex trafficking rings in the United States.

Prosecutions for human trafficking offenses dramatically increased through 2015, a just-released report from the Bureau of Justice Statistics reveals.

In 2015, 1,923 suspects were referred for prosecution for human trafficking offenses, an increase of 41 percent from 2011.

After just one months in office,  the FBI made a staggering 1,500-plus arrests of  sex traffickers in one short month; while there were less than 400 sex trafficking-related arrests in 2014 according to the FBI.