Half of the U.S F-15 fleet needs major upgrades and overhaul – or retirement 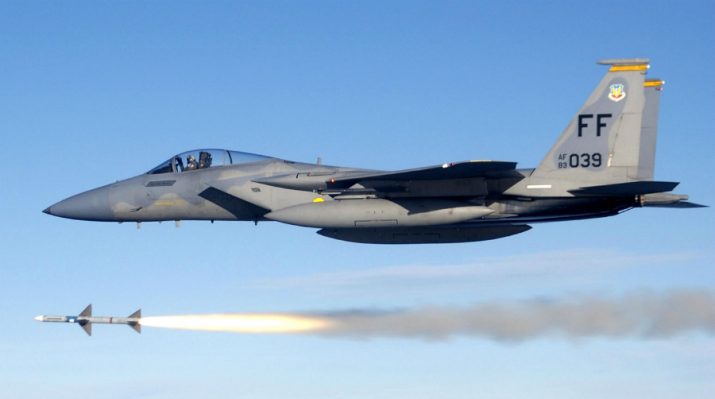 (NationalSecurity.news) Years of low-level conflict have worn down the U.S. military logistically, and this of course includes the Air Force. Though there was never a legitimate air threat in Iraq or Afghanistan, the Pentagon has nonetheless committed U.S. air power to both of these theaters. In fact, if you count the “no-fly zones” in Iraq through the 1990s and 2000s, U.S. aircraft have been patrolling those skies for nearly 20 years.

In fact, many of the same aircraft. And now the piper has to be paid, only, there’s little money in the kitty to pony up the dough.

As reported by Defense One, the Air Force’s F-15, in service since 1976, is still its premiere air superiority fighter, but the fleet is literally reaching its breaking point. Two things have to happen, the site reports: Massive overhaul of half the existing fleet, or get them out of the sky:

Officially, the Air Force plans to keep the F-15C/D around for another quarter-century. (Its newer cousin, the ground-pounding F-15E Strike Eagle, is slated to serve even longer.) But in recent years, military leaders have retired more warplanes than planned to save maintenance money and buy newer jets. Several Air Force officials have said the service’s top generals are reviewing how the air-to-air-only F-15s fit into that mix. …

Even though it’s been around since the 1970s, the F-15C/D is still considered one of the best aerial combat jets ever made. In the U.S. military, its dogfighting capabilities are bested only by the stealthy F-22. …

But keeping the Eagles flying has been a challenge. Many of the companies that built its unique parts don’t exist anymore. And despite being kept in top-notch shape, these machines are finicky.

Keeping them aloft will only get more expensive. Three decades of high-performance maneuvers have taken their toll on the fleet. The F-15s need new longerons, steel beams that hold the structure of the plane together. Nine years ago, an Eagle broke apart over Missouri when a longeron snapped. The pilot lived, but was injured when he ejected from the crumbling jet.

The Eagles also need new wings, a major upgrade planned to be done by the mid-2020s.

Then there is the new electronic equipment, including a new central computer, needed to keep the plane lethal against Russian and Chinese surface-to-air missiles and aircraft.

Air Force officials clearly want to salvage the aircraft because it is still one of the most fearful dogfighters in the sky. But the incoming Trump administration has some hard choices to make regarding its future. For now, however, Pentagon and Air Force officials will just have to get creative in financing necessary upgrades, or keeping more F-15s on the ground.